The Year 2011 marked a quarter-century of LISTSERV®, the original email list software. Read the stories and see the photos that LISTSERV maintainers, list owners, moderators, editors and subscribers have shared with us.

In 2005 while recovering from a series of operations for metastatic Kidney Cancer, I was shocked to find how little information there was in South Africa about the subject. Thankfully I found ACOR and the Kidney-ONC list and with their help, direction and encouragement I battled on and have the cancer as much under control as it can be.

In 2009 I saw another South African on the list asking about treatment for her father. As they also lived in Johannesburg, I contacted her and invited her parents to a support group I am involved in. Two urologists had refused to do the nephrectomy so I referred them to my urologist who removed her father's kidney. This grand elderly man is now enjoying a happy retirement, fishing and running marathons.

Back in early 1994, my husband and I hooked a modem up to our computer and subscribed to a BBS so we could learn more about how to help our autistic daughter, then seven years old. The first thing we did was to subscribe to the Autism Listserv, then run under St. John's University.

It was an eye opener. Not only were we able to connect with other parents who had been there and done that, we were also able to connect with autistic adults who were finding each other for the first time, and building a strong, vibrant autistic community. The information, advice, and support received were invaluable, and a strong contributor to how well my daughter, a part of that community, is doing today.

As the community grew, new lists split off to discuss specific issues with autism. Eventually I became a listowner of one of those lists, and went on to co-found and run ICORS, under a very generous donation from L-Soft. Both are a very small way to pay back the support my family received from our first experience with Listserv.

Thank you for being there.

Over a year ago I was floundering with a food addiction. A friend of mine recommended The Recovery Group. Their programs and loops have changed my life in so many ways, I could write on forever.

I understand you are the reason TRG can exist. I cannot thank you enough for your help. You helped save my life.

I believe our VM node, ASUACAD, was assigned license #95 back in the mid '80s. It was running initially on an IBM 4381 VM/HPO. I remember Eric when he was a student at FRECP11 and eventually writing routines for Relay, Chat, and of course LISTSERV. We have been running LISTSERV continuously since then – VM/CMS, Dec's digital unix, Solaris and currently as a VM Linux guest under Xenserver.

I've been a LISTSERV list owner since 1991 for a Corvette list – I believe it is the longest running "email" discussion list in existence – it's a dinosaur compared to the current forums that are being used but it's never given me a problem since day one and some still prefer to receive emails. I still have about 400 die hard users still subscribed. We've held annual road trips (VetteNet Southwest) to various parts of the southwest. This year's destination is Colorado.

I still see some of the old timers still posting on LSTSRV-L, it sure brings back a lot of memories in an era when spam, malware and viruses were unknown words.

I hope I'm still alive for your 50th anniversary.

When MEDLAB-L was created in 1994 I had no idea how wide an audience could be reached and what good would ensue. Since then we've had thousands of medical laboratory professionals subscribed in over 50 countries. The list has been invaluable for lab professionals to ask questions and learn best practices from some of our most knowledgeable leaders. It's possible we've even saved a few lives over the years via the list.

Thanks to Eric and L-Soft for making this possible.

LISTSERV has been the communication lifeline of many online cancer organizations. I would like you to know that LISTSERV saved my life in year 2000 when I was desperately running out of time with advanced sarcoma. When I had less than a few weeks to live, word of a small and barely publicized drug clinical trial trickled to me over LISTSERV. I was able to join that trial, and I have been on the drug now for 11 years, after having once been at death's door. The drug ultimately became famous in oncology world – Gleevec. I think many other cancer patients have similar stories.

LISTSERV Team at the Office of Information Technology, Princeton University 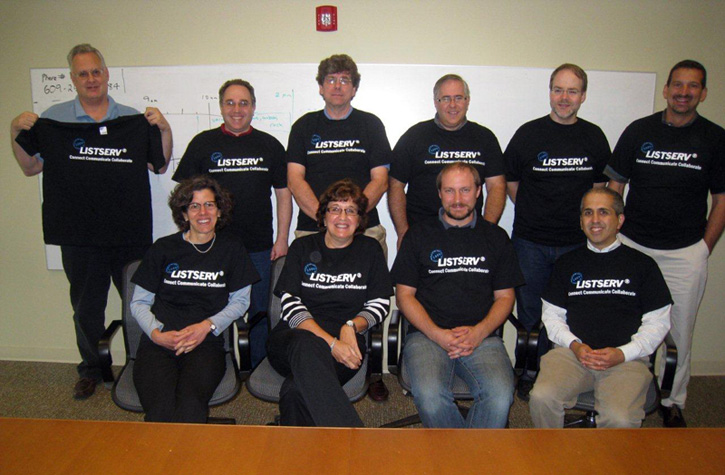 LISTSERV is a registered trademark licensed to L-Soft international, Inc.

See Guidelines for Proper Usage of the LISTSERV Trademark for more details.

All other trademarks, both marked and unmarked, are the property of their respective owners.